Renowned as a client lead, Diane is an adaptive multi—skilled land economist specialising in negotiating and delivering complex, multi stakeholder projects. She is focused, dynamic, independent and inspirational in the way she helps clients to hold difficult conversations and is adept at enabling, facilitating and bringing people and resources together to achieve organisational objectives. Stakeholder smart her project delivery seeks a customer focused approach to broker collaborative working between key partners to achieve shared objectives. She leads and innovates to manage change, energises and resolves complex issues in the areas of land management, land administration, gender rights, land and coastal property regeneration to deliver successful outcomes. As a professional with a Royal chartered status, operating in the land economy her aim is to improve people’s livelihoods. Diane has helped government’s donor agency private sector professionals working across the commonwealth countries this is evidenced by key areas of specialism... "My origins lie in land economics and principles of good governance working for the public and private sector; specifically, across the Commonwealth."

Dr. Orhan Ercan He had his BSc at 1983, MSc at 1988 and PhD at 1997. He worked as executive staff at `Turkish National Spatial Data Infrastructure (preparatory works) phase I and II` and Land Registry and Cadastre Information System (TAKBIS) Projects. He was the critical research staff worked at CORS-TR project group. After retiring from the Turkish General Directorate of Land Registry and Cadastre, he worked in the private sector for several years. Besides, he has been involved in various geodetic and surveying – photogrammetric mapping, regional/urban planning, agriculture-based land use planning, software development, consultancy etc. projects in Turkey, Libya, Saudi Arabia and neighbouring countries. He had published/presented more than 50 papers for various academic journals/congress. He served as the Vice President of the International Federation of Surveyors (FIG) in 2017-2021. He is currently UN-GGIM Land Administration Expert Group member as a FIG representative and works as a lecturer at Department of Real Estate Development and Management, Faculty of Applied Sciences, Ankara University.

Mr Vladimir Krupa is CIO and Project Manager in the design company, Zavod za urbanizam i izgradnju d.d. Osijek“ responsible for spatial data, information technology and development. At the establishment of the Croatian Chamber of Chartered Geodetic Engineers in 2009, he became member of the Management Board and from 2013 to 2019 he was the President of Croatian Chamber of Chartered Geodetic Engineers. He is currently President of the Council of European Geodetic Surveyors ( CLGE ).

Secretary of State in the Ministry of Transportation and Infrastructure

Mr. Ionut Savoiu is State Secretary at the Ministry of Transportation and Infrastructure since January 2022. Between 2012 and 2016 Mr. Savoiu was member of The Romanian Parliament – Vice-president of IT&C Commission. From 2005 to 2012, he was country managing director of Blom Romania and international consultant in Blom International. During the Blom Romania period, Ionut Savoiu was in charge of business development, sales and projects in Romania and countries in East Europe. Further Ionut was responsible of mapping and GIS production for Blom Group. In 2004, he was appointed as Deputy General Manager of National Agency for Cadastre and Land Registration (NACLR), Romania. He is honorary advisor to the Board of the Romanian Surveyors Association. Ionut Savoiu graduated from Faculty of Geodesy – Technical University for Construction Bucharest, Romania. His diploma was prepared at Institute for Photogrammetry – Hannover University, Germany. He holds an MBA at IEDC - School of management Bled, Slovenia. Between December 2018 and January 2022 Ionut Savoiu was the President of UGR.

Director of Technical Directorate in the Ministry of Development, Public Works and Administration

Anca GINAVAR is an architect, certified urban and regional planner, certified project verifier, currently being the Director of the Technical Directorate, within the Ministry of Development, Public Works and Administration and also associate lecturer within the University of Bucharest, teaching legislation in urban planning, construction, public administration and good governance. Within the ministry, her main responsibilities are the coordination of the activity of territorial and urban planning and construction at central level, technical coordination of the reform in the spatial planning and construction domains, including building renovation and sustainability. She is a certified trainer for public administration with an important experience in teaching and training in fields such as urban planning, public administration and good governance, strategic planning, citizen participation. Her commitment to sustainability are reflected in 23 years of international experience in the field of design, implementation and evaluation of urban planning and strategic development policies, construction and architecture, programs and projects.

Director in the General Department for European Transport Programmes

Robert Dobre is Director in the General Department for European Transport Programmes at the Ministry of Transport and Infrastructure and PhD lecturer at the University of Bucharest on spatial planning and sustainable development. His doctoral thesis focused on the planning of transport infrastructure in the Prahova Valley, with particular reference to the Comarnic - Brasov motorway. Since 2014 he has been part of the team of the Ministry of Transport and Infrastructure where he coordinated the General Transport Master Plan of Romania. He also coordinated the implementation of the Investment Programme for the development of transport infrastructure for the period 2021-2027 as well as Component 4 - Sustainable Transport of the National Recovery and Resilience Plan (PNRR).

Mrs. Ana-Cornelia Badea is Professor at the Faculty of Geodesy, the Technical University of Civil Engineering Bucharest, being the director of the Research Center Geodetic Engineering Measurements and Spatial Data Infrastructures. She is the representative of the UTCB at FIG, being delegated to Committees 3 (Spatial Information Management), 7 (Cadastre and Land Management), 8 (Spatial Planning and Development). Her research interests are related to GIS analysis, WebGIS applications, spatial planning, 3D modeling, 3D cadastre, GIS-BIM integration, mobile mapping, geospatial standards, LADM. Recently, she has been involved in projects such as EU-CONEXUS Project - responsible for GIS and Remote Sensing Course, DivAirCity-H2020, COST16219, COST17125. She is vice-president of the Romanian Surveyors Union and member of the ASRO TC 359 Standardization Committee, connected with ISO and CEN.

Mr. Pietro Grimaldi formed under the Civil Engineering Building (School of Supsi in Lugano and at the Faculty of Engineering in Bari) since 1982 is interested in "Architectonic Photogrammetry" is the remarkable photogrammetric documentation of the "Convent of San Damiano in Assisi" performed in 1990. Grimaldi turns great interest to architectural documentation with the use of new technologies following the development of digital technology in Photogrammetry and starting, in recent years, the study in addition to the finalization of the survey, the proper use of laser scanning 3D and thermographic technology in architectonic documentation. Focussing the documentation of cultural heritage as evidenced by the last "business" of initiating a "Center for Documentation of Cultural Heritage on line in South America" with the sponsorship and contribution of the University Central of Venezuela (UCV). Finally, the participation in and publication of some 50 works, most of them in international conferences (Spain, Poland, Romania, Greece, USA, Brazil, Venezuela, China, Costa Rica). At the moment Professor Pietro Grimaldi is in the position of expert on the subject of photogrammetry and 3D laser scanner in the Politecnico di Bari (Italy).

Mr. Cornel Paunescu is member of the Romanian Surveyors Union since 1990 and he was elected as President in 2014. He is Vice President of Association of private surveyors. Starting with 1991 Mr. Paunescu is professor PhD. Eng. at the Faculty of Geology and Geophysics, University of Bucharest. During this period he was the author of several courses of geodesy, topography and GNSS. He is General Director at Cornel & Cornel Topoexim SRL since 1994. He was involved in developing the works of national interest with National Agency for Cadastre and Land registration, CNCFR S.A, National Airport Company S.A., OMV Petrom S.A., Hidroelectrica S.A. 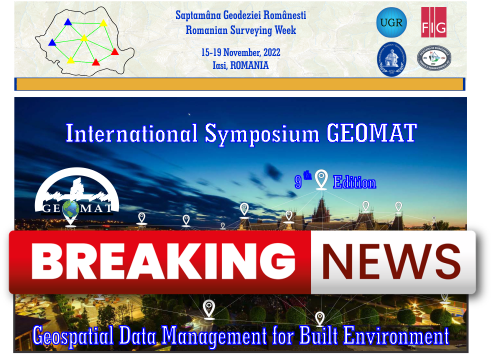 For participants registered after November 11, 2022, the organizers will not be able to provide the conference materials at the time of the event.! 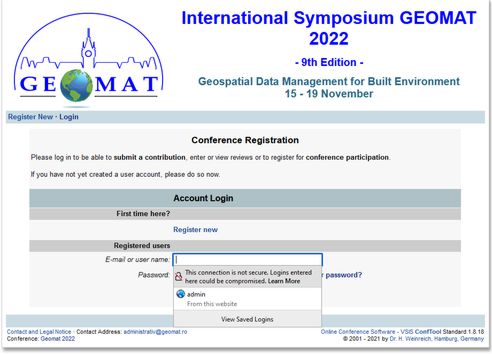 Get in Touch with Us

Our Headquarter are in Iasi, Romania, Europe